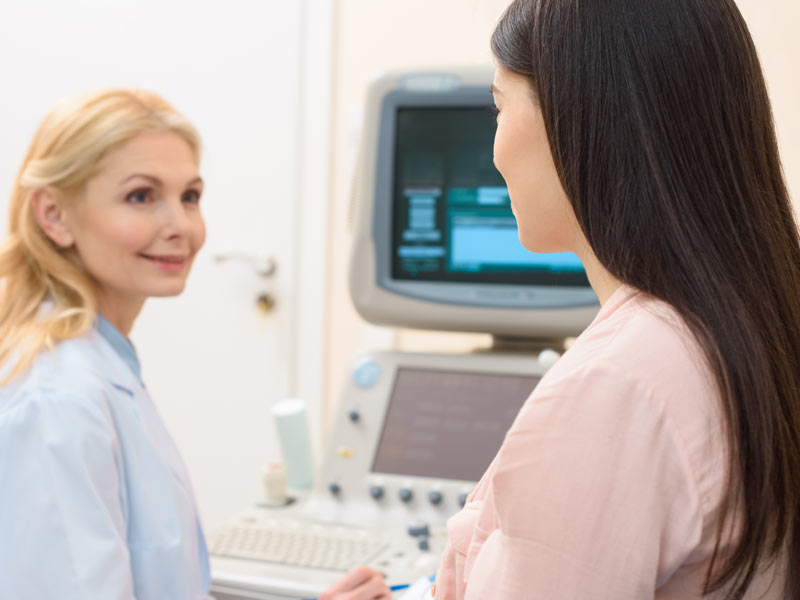 Infertility is defined as one year of regular, unprotected intercourse without a resulting pregnancy. Over 6 million couples in the United States currently struggle with fertility problems.

Earlier evaluation and treatment is required for patients over the age of 35, those with a history of absent or long interval menstrual periods, known uterine/tubal disease or a partner who is known to be sub-fertile. Infertility can be an emotional and stressful issue that is rarely, if ever, expected. If you have been trying to get pregnant without success, talk to your healthcare provider about scheduling an infertility consultation. Evaluations are individualized for each and every patient.

Your reproductive goals should always be considered as well, including the ideal number of children you want and when you want to get pregnant. Once you have a plan, your provider can help put that plan into action.

The following “Guttmacher” classic table has served as the standard of statistical information and gives us a good idea of the normal expectations of pregnancy.

Time required for conception in young couples who will attain a pregnancy:

Infertility is usually classified as primary (occurring with no previous history of pregnancy) or secondary (occurring after one or more successful pregnancies). The causes of either type of infertility may be the same. Each pregnancy is unique and can predict nothing about future fertility, although a couple who has conceived before stands a better statistical chance of conceiving again.

There are three main areas included in the initial fertility evaluation:

Male Factor
Semen Analysis
• Because of the relative low cost of this test, it is normally one of the first to be done. This is pivotal in determining which way to go with both male and female reproductive therapy. The specimen is ideally produced after two days of abstinence from any sexual activity and should be collected in the lab or brought to the laboratory (at body temperature) for analysis no later than 30 minutes after it is produced.
• If the semen analysis is abnormal, you may be referred to a urologist for further evaluation concerning corrective medications, corrective surgery, or sperm acquisition.

Ovulation and Hormonal Disorders
• If a woman doesn’t ovulate (release an egg from the ovary) during her cycle monthly, she may have trouble getting pregnant. Women who don’t have regular periods often don’t ovulate consistently as hormonal input during ovulation is what causes a woman to have regular period cycles.
• Women with polycystic ovarian syndrome (PCOS), thyroid disease or other hormonal disorders can affect ovulation leading to infertility. Women who are overweight or significantly underweight are also less likely to ovulate consistently than women of a normal body weight.
• Women are born with a fixed number of eggs in their ovaries. As women get older, the number of eggs decreases. While 1 in 4 women in their 20s and early 30s will get pregnant in any single menstrual cycle, only 1 in 10 women in their 40s will get pregnant in a cycle.
• Home monitoring with ovulation predictor kits (OPKs) can be helpful to detect a surge in the hormone LH (luteinizing hormone) that happens just before ovulation.
• The evaluation to assess ovulation and hormonal disorders includes a full medical history reviewing your menstrual cycles, medications, lifestyle habits and surgical history. A few basic blood tests will also be done including but not limited to TSH, FSH, prolactin, testosterone, estradiol, progesterone and anti-mullerian hormone levels.
• Ovulation Testing:
Subtle or obvious abnormalities in hormonal production areas (brain, adrenal, ovarian, or thyroid) can interfere with the normal development, ovulation, and fertilization of an egg.

Tubal or Uterine Problems
• Fallopian tubes are the tubes attached to the uterus where the sperm and egg meet. If tubes are blocked or damaged, there is a higher chance of infertility or ectopic pregnancy. Risk factors for tubal occlusion include prior abdominal or pelvic surgeries, history of sexually transmitted infections or endometriosis.
• To assess whether your tubes are open, a test called an HSG or hysterosalpingogram may be recommended. An HSG is an x-ray procedure that is used to view the shape of the uterus and ensure the fallopian tubes are open.
• A baseline pelvic ultrasound is also done which is a painless test to evaluate for problems with the uterus, uterine lining, or ovaries.
• A sonohystogram is an ultrasound test with saline solution which can be done to get a better look inside the uterus to evaluate for polyps or fibroids.
• In some instances, a minimally-invasive surgery called laparoscopy or hysteroscopy is recommended to evaluate for other uterine problems including scarring, uterine anomalies, or endometriosis.

In more than 10% of cases, there may be no identified cause found for infertility, but there are still methods to help improve chances of pregnancy. We can use treatment options including ovulation induction medications  or intrauterine inseminations (IUIs) to increase pregnancy rates. In patients with unexplained infertility, there is a baseline pregnancy rate of between 1-4%.

Ovulation induction medications can increase pregnancy rates by about 5% and medication & IUIs increase pregnancy rates by about 8%. Unexplained infertility can be especially frustrating since there isn’t a specific reason you aren’t getting pregnant but your healthcare provider will walk you through your treatment options step by step to give you the best chance possible to get pregnant.