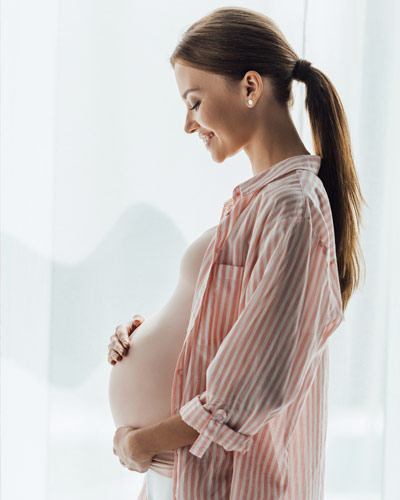 Early in pregnancy, a baby can change positions many times. As you approach your due date, most babies will turn head down (vertex) to prepare for delivery. Breech position describes a baby whose buttocks are adjacent to the birth canal. About 3-4% of babies are breech at term.

Your health care provider can usually feel the position of your baby by placing their hands at certain points of your abdomen.

There are three types of breech position:

Frank breech – The buttocks are in place to come out first during delivery. The legs are straight up in front of the body, with the feet adjacent to the head. This is the most common type of breech position. 50-70% of breech fetuses are in this position.

Complete breech – The buttocks are down near the birth canal. The knees are bent, and the feet are near the buttocks. About 5-10% of breech fetuses are in this position.

Incomplete/Footling breech – One leg or both legs are stretched out below the buttocks. The leg or legs are in place to come out first during delivery. 10-40% of breech babies are in this position.

Causes of breech presentation can include preterm labor, multiple gestation, too much or too little amniotic fluid, uterine anomalies or fibroids, weakened uterine muscles, and fetal congenital malformations. Often, there is no clear reason why the baby did not turn head-down.

When breech presentation is identified, we must evaluate whether the fetus is in this position because of an underlying abnormality. We also must take measures in order to avoid maternal and fetal harm during delivery. A baby in breech position can be at an increased risk during delivery because of compression of the umbilical cord. Cord prolapse is also more common in breech presentation.

Pelvic exercises at home can be useful in trying to encourage the baby to flip to a head-down (vertex) position.
www.spinningbabies.com

External cephalic version – this is a procedure used to turn a fetus from breech position into a head-down (vertex) position before labor begins. When successful, version makes it possible for a woman to try a vaginal birth instead of having a cesarean section. External cephalic version is typically tried at term, when the fetus is less likely to turn back to breech position. This is done in the hospital where the baby can be closely monitored before, during, and after the procedure. You may require an epidural prior to this procedure. After first using medicine to relax the uterine muscles, your doctor presses on specific areas of your abdomen to turn the fetus. More than half of attempts at version succeed. The risks of external cephalic version are rare but can include rupture of membranes, placental abruption, problems with the baby’s heart rate, and injury to the baby.

The American College of Obstetricians and Gynecologists Committee on Obstetric Practice recommends use of external cephalic version and planned cesarean delivery for persistent singleton breech presentation at term.¹